Start typing and press
Enter to search
Skip to content

Rather than post a happy picture on Instagram or write a lengthy post on Facebook letting the world know I’m pregnant with baby number two, I wanted to take you on the journey of my pregnancy so far, feelings and all. I know of the phrase ‘second child syndrome’ but there should definitely be a phrase called ‘second pregnancy syndrome’.

It was a romantic feeling with my first pregnancy of Matilda, my husband was downstairs cooking whilst I was upstairs in the bathroom taking the test. Together, in that moment of anticipation and waiting, we saw the two lines appear and were over the moon. I laughed with happiness, he almost cried with joy. We were on cloud nine, it was the beginning of our little family and the start of many happy memoires, and we were so excited. I would love to say the same scenario happened with our second pregnancy, but it didn’t.

Our second pregnancy with this little babe felt so different, feels so different. We had both wondered why I had been feeling so tired most of the time, I put it down to being a mum to a toddler and a puppy, starting up a business, having a part time job and running a house. I suppose subconsciously I knew those factors were not the reason to me feeling complete and utterly exhausted, so whilst he my husband was at work, I peed on a stick. Two lines appeared, my heart sank and before I knew it I was off to a baby class with Matilda. I had no time to process how I felt, but at the same time couldn’t think of anything else.
I video called my husband later that day and told him the news, he was happy, shocked but happy. I still didn’t know how I felt (and it makes me sad right now to even write that). My first pregnancy I fully embraced, I got every book and app going, I took care of myself with meditation, yoga, baths, sleep, I started online shopping for all things baby. But this time round, it’s different, so different.

I am terrible for keeping my own secrets, so we (well, I) told a few people before we had our first scan. But saying it out loud didn’t quite feel real though. During my first pregnancy I had terrible nausea for the first 14 weeks, so I physically felt pregnant, every single day. However this pregnancy, no nausea, no sickness. I’ve had no symptoms at all really (except for the heightened emotions, hormonal imbalances and the massive sense of overwhelm).

One day in particular, I hate to say this out loud to the world, but I didn’t wat to be pregnant, I know that is such an insensitive thing to say, but I didn’t. I felt so overwhelmed by life as it was already, this pregnancy just added to the overwhelm.

Within about four weeks of finding out we were expecting, we had the scan. Well, the flood gates opened that day. I saw our baby on the screen and I cried. I cried out of guilt, guilt of not wanting to be pregnant, guilt of not feeling 100% happy with being pregnant, guilt of deserting this baby (because that’s how I felt I had behaved). In that moment, I said a prayer in my mind, I apologised for abandoning this baby and I made a promise to love this baby with all of my heart and fully embrace pregnancy, just like I had done with Matilda. 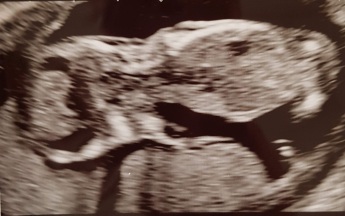 Since our scan, I have started reading Sophie Fletcher’s Mindful Hypnobirthing and I am looking forward to reading Kimberley ann Johnson’s The fourth trimester. I have booked onto a pregnancy yoga class, and I am taking more time out for my self-care practices such as making time for bubble baths and looking forward to enjoying a self-love day retreat.

Please don’t get me wrong, I am so happy that I am pregnant, I don’t think someone can say they aren’t ‘trying’ to conceive if they technically aren’t using contraception. I just didn’t know I would feel the way I have done, that’s all. Our dream family of four and a puppy is on its way of becoming complete and after seeing the scan and seeing baby for the very first time, I am honestly looking forward to the next two trimesters. I am so excited to see Matilda become a big sister. And I can’t wait to meeting our little baby. 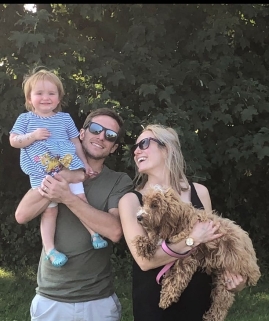